Every person on earth has a God-given gift and purpose. Utilizing our gift with our purpose we can set and achieve the goals of our biggest dreams. When we use the gift/s and talent God has blessed us with and marry that with a specific purpose or passion that we have identified as our reason for being created we can attach that to a goal in that area and be amazingly happy. Realize Your Gift How do you realize your gift? You are good at your gift. Your gift is like a fingerprint. No one's gift is the same. For example, if
Read More

4 BENEFITS YOU REAP BY EMBRACING THE CULTURE OF CELEBRATION

A celebration shouldn't only be for grand accomplishments, or by way of fancy parties and expensive gatherings. You can celebrate small things like completing your assignments, and you reward yourself with a hot bubble bath. Doing little things for micro wins is a celebration too. That way, the celebration can be a lifestyle so you can continuously reap its benefits. Allow me to point out four benefits you take away from regularly celebrating small and significant achievements. Health Benefits: Celebration induces a release of wellness hormones into your body system, which have health benefits like reduced stress levels, pain reduction, weight reduction,
Read More

I want to discuss your passion, your purpose, and your gift. So many people that I talk to don't know what their passion or purpose is. They are living a stagnant and living an unfulfilled life. Everybody wants to live a fulfilled life. Here is where I want to help you. I want to address finding your life's purpose. Living your purpose with passion and discovering your gifts. I am living my purpose. When I was in the military, I was a goal coach. I helped people reach their goals as they left the military. Now, I give to my clients and audiences that push they
Read More

Improv is beneficial! Here is a series of tips to keep in mind. The Mind I want to tell you about the mind. I’ve discovered that improv is beneficial to the mind. It interacts with the, Four C's • creativity • critical thinking • collaboration • communication You must be able to think on your feet. Surprisingly, improv is taught in schools. On a popular Saturday night show is a great example. There is a lady that impersonates famous people. Most of the show is not a skit. She makes up most of the skit as it moves along. Enabling her to be able to think and act quickly. I tried this
Read More

Many things prevent people from completing their goals. One of the biggest ones that I think is Self-Sabotaging habits. Not recognizing them and continue doing them. Self-sabotaging habits are things that we do and may not be aware of. I'm going to give you a few of the predominant ones. You must recognize and be able to recreate them in your mind to put something in its place instead of that. Some of the self-sabotaging habits are: • Procrastination • Self-Condemning • Isolation • Martyrdom • Self-criticizing • Being on autopilot (doing stuff like eating without thinking) Procrastination is a big one for me. That will prevent me from
Read More

Are you staying true to your goal? Most of us get off track so easily. I know this to be true; I'm guilty of it because I am not a perfect person. So, here are 9 Tips to get you on track. 1. Visual Look at your business plan and goals daily. Visualize your result. Imagine looking at where you want to be and say it out loud every day. 2. Write What helps me is my Masterful Purpose daily action planner. I created it to help me stay on track. Writing out your 30 day and yearly goals is a plus. As you plan your
Read More

Limited thinking is what prevents people from achieving their goals. I have a daughter that never takes no for an answer. She has a strong mind and achieves what she set her mind to achieve. We as humans have auto reflexes that automatically tells us no before our mind tells us yes. And we must set certain triggers to discipline our minds to not go into that negative thought pattern. We must do it. Be careful who you’re saying things to. Some people will talk you out of things for many reasons that are not healthy for you. Set out to take, can’t,
Read More

Are you faced with things that make you unable to move forward in business and life?   I want to provide some tips and tools to help you discover how to overcome the barriers. One hundred women took a survey I posted asking, "what is your fear?" One of the biggest concerns is a failure. Nobody wants to fail. God commands us not to fear. "Fear not "is mentioned 80 times in the Bible. God intends for us to be successful in everything we do. Trying to rely on self instead of relying on God. Isaiah 41:10 says, "Fear thou not; for I am with thee:
Read More

Exercise! Mind Tip If you feel yourself getting down, do some exercises. It revs up your dopamine and it is great motivation. Exercise is something that will help your mind focus better. Try doing some: • Jumping jacks • Push-ups • Sit-ups Whatever you can do to rev up your adrenaline and it'll get back to feeling better. If you don’t have a tribe, friends or family that you can call when you need motivation it’s hard to bounce back. Don’t isolate or stay away from others. Call somebody that you know will motivate you to keep going. Choose somebody that does not have can't in their vocabulary. But
Read More

How are you today?   Drink Water Please understand that drinking water is going to help you. I know it's difficult and I struggle with it as well. You must make a conscious effort to drink the amount of water, and you need it. Go online and find out how much water you need to drink for your height and weight. When you don’t drink water, it can and will affect the way you communicate with others. Pay close attention to your mood when you're speaking to people, then check your water intake. You will be surprised at how this is a surprising fact. Mind If you are
Read More

You have mind control! Mind tip Never forget that you have mind control. There was research done where they did surgery on some patients with knee issues. Some of them with the permission of the family were operated on, while the others were not. After observation, the people that were not operated on for their knee injuries had significant Improvement, stating that they felt better, even though they were not operated on. Now, the doctor just made some small tiny incisions on their knee but did not operate on them. And because they had seen the incision, they believed they were better. That's how
Read More

Have you doubted yourself? Today’s topic is something that's come up multiple times this week. CS Lewis said, “I found that nothing is more dangerous to one's faith than to work the work of an apologist.”  Doubt will keep you stuck. When I joined the military at age 32, I wasn't in the best of health.  During my military training, I cracked my foot.  I was a single mother, three kids, and I went into the military with faith that I can finish the training.  I was in there with a bunch of eighteen-year-olds. I was older than my technical instructor at that
Read More

Laying all your burdens and cares on God’s mantle is so liberating. It is like when you are carrying two arms of heavy groceries, full of canned goods and meats, packed to the brim. You want to make one trip into the house, so you grab the gallon of water in one hand. Now you have your purse on your shoulder and get to the door only to realize you forgot to get the key out. Now, you have to dig in your purse and the load is getting heavier and heavier, and your arms start to ache. You can’t find
Read More

I WANTED TO SHOUT AT THE TEACHER…NOOOOO!

I often speak at schools. My topic is goals and gifts. I do it because I love children and I see the need to help educate children on more than the basics. I was at a class speaking on goals and towards the end of the talk, this thirteen-year-old asked me what a goal was. That really opened my eyes. I had given the youth information on their gifts, and the four keys to setting goals. Many of them verbally stated what they wanted to be when they grew up, and we discussed ways for them to start researching and finding
Read More

I had the opportunity to speak on the platform with the mayors of Fontana, Rialto, several other dignitaries, and doctors, at the 12th Annual City of Rialto “State of the Women Conference” on March 3rd. The conference celebrated the women who fought and still fight against discrimination against women over the years and progress that’s been made. There were over 600 women in attendance even with the inclement weather experienced that day. When I wrote the poem, delivered to "The State of the Women Conference" I researched the past achievements and current women discrimination issues. The Shero’s and the atrocities. Since the
Read More

Thanks please check your mail for further instructions

Discover your gift/s, get clarity on your purpose, achieve massive goal success! Get your Masterful Purpose Goal and Daily Action Planner and Guide now! The year is almost over! 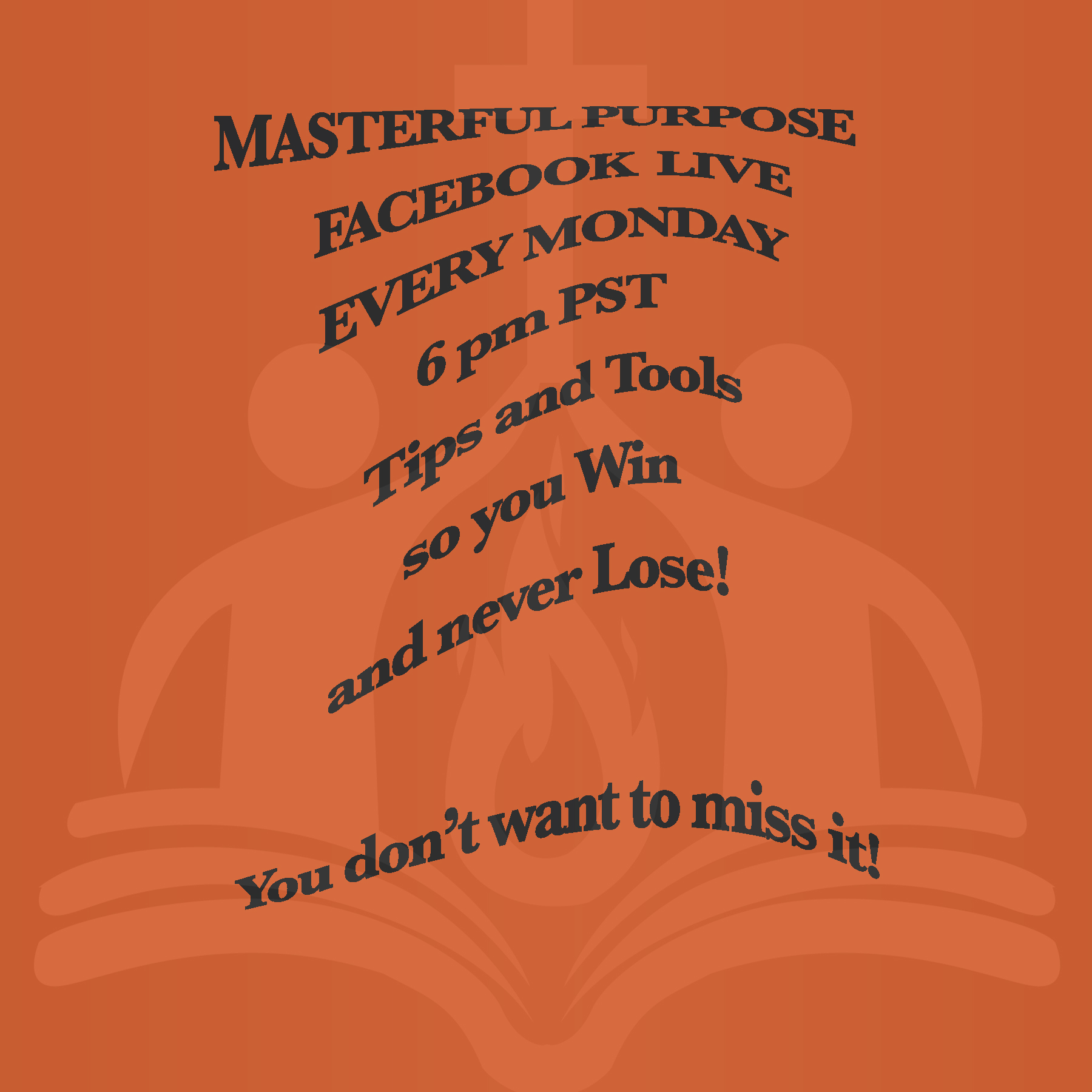 I complete my top seven goals every day. My top seven task everyday give me the most results towards my 30-day goal.

Home
Cart (0)
Wishlist (0)
Login
Back to Top
Thanks for subscribing!